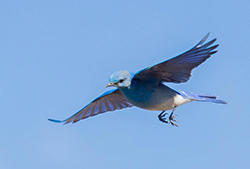 Bluebirds - Carrier of the Sky

There are three species of bluebirds found throughout North America including the Eastern, Western and Mountain Bluebirds. And even though they share many of the same characteristics and behaviors, there are quite a few traits that differentiate the species of bluebirds.

The name “bluebird” is actually a bit misleading. Most bird colorations are due to pigments deposited in their feathers. A Northern Cardinal is red because of the red pigment called carotenoids. Crows are black because their feathers contain a dark pigment called melanin. In contrast, bluebirds do not have a single molecule of blue pigment in any of their feathers. The top transparent layer of each bluebird feather is filled with miniscule pockets of air. When sunlight strikes these pockets, all of the other visible wavelengths of light are absorbed. Only blue escapes and it is scattered in all directions for the eye to see.

During courtship, as days grow longer, male bluebirds release hormones that stimulate the area of the brain responsible for singing behavior; unpaired males can sing between 400 to 1,000 songs per hour. Bluebird adults return to the same territory every year and are generally monogamous during breeding season.

All bluebirds are cavity nesters and will use artificial nest boxes. In fact, from the late 1800s to the 1960s, Eastern Bluebirds’ population declined almost 90% because of competition for nesting space from the imported House Sparrow and European Starling. However, since 1966 the population has increased 2.4% each year due to nesting boxes. When using natural cavities, bluebirds select abandoned woodpecker nests 75% of the time.

Bluebirds love to eat mealworms, and they consume about four grams of food per day, about 12% of their body weight. Eastern and Western Bluebirds sit on elevated perches searching for insects. When they spot one, they’ll drop to the ground and capture it with their bill, a behavior known as “drop-hunting.” In contrast, Mountain Bluebirds can hover while searching for insects. This enables them to live in areas with few trees or shrubs.